America On The Couch: Psychological Perspectives On American Politics And Culture

PRAISE FOR AMERICA ON THE COUCH:

“A unique and welcome collection of interviews with leading psychologists over twenty years . . . full of revelations and insights to shape our notions of citizenship.” –Joshua Wolf Shenk, author, Lincoln’s Melancholy and Powers of Two.

“America on the Couch—at once intimate and expansive—reflects a two-decade commitment to understanding the profoundly complex heart of America. In compiling this volume, Pythia Peay has redefined and deepened the meaning of ‘citizen.’” –Howard G. Lavine, Arleen C. Carlson Professor of Political Science and Psychology, University of Minnesota.

“America on the Couch will inspire Americans to get off their individual couches and into the more communal streets, enacting, in Peay’s term, a more ‘psychologically conscious’ citizenship.” –Jennifer Leigh Selig, author Integration: The Psychology and Mythology of Martin Luther King, Jr. and His (Unfinished) Therapy with the Soul of America. 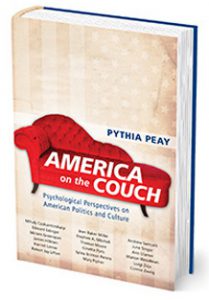 From the Book Cover:

What lies behind America’s historic romance with the gun? Why does it have such a troubled relationship with alcohol and drugs? Why is it so wedded to consumerism and so resistant to the evidence of climate change? What are its enduring myths about individuality, freedom, and independence, and how might we re-imagine our vision of the United States as the “Promised Land” and “The City on the Hill” to reflect a multiculturalism that offers the “last, best hope” for the world?

In a two-decades-long journey through the American psyche, depth journalist Pythia Peay has asked these and many more questions of no fewer than thirty-seven of the world’s leading psychologists and psychoanalysts. From Robert Jay Lifton to Marion Woodman, A. Thomas McLellan to Judith V. Jordan, Mihaly Csikszentmihalyi to June Singer, and James Hillman to Mary Pipher, the thinkers in America on the Couch discuss violence, addiction, the environment, capitalism and consumerism, politics and power, and the soul of America. The result is a uniquely comprehensive, wide-ranging, and compelling kaleidoscope of insights into the psychodynamics of a hegemon in peace and at war, as it confronts the shadows of the American century and charts its way into an uncertain, multi-polar future.

Pythia is an author, depth journalist, and speaker whose work has appeared in numerous magazines and newspapers, including Washingtonian, Religion News Service, The Washington Post, and The Huffington Post. read more.

Listen to my interview ​with
Mark Matousek