American Icarus: A Memoir of Father and Country

PRAISE FOR AMERICA ON THE COUCH:

“This tender, extraordinary memoir captures the brilliance and heartache, love and reckoning, of a daughter’s near-mythic relationship with her complicated, charismatic father. Beautifully written, piercingly observed, American Icarus deserves a place next to Annie Dillard’s An American Childhood and Mary Gordon’s The Shadow Man.”--Mark Matousek, author, The Boy He Left Behind

“A compelling tale of potential, realized and lost, of heroism and hope, of despair and persistence. This story echoes the American way—longing for stabilizing roots and seeking wings of freedom. Through the loving and eloquent voice of his daughter, Joe Carroll comes alive and American history gains texture.” –Judith Jordan, Ph.D. Director, Jean Baker Miller Training Institute

“This is the story of fatherhood in America and of America itself [and] a brilliant, beautifully written, passionate and insightful book that will grab you and make you wonder, and grow you into a strong-minded and big-hearted

“In this poignant and psychologically sensitive tale of family, Pythia Peay reaches back into the mists of time to understand and ultimately forgive her angry, sad, and drunken father burdened with his own survivor guilt. As she finds him in memory, she locates herself.” –Charles B. Strozier, psychohistorian, author, Heinz Kohut: The Making of a Psychoanalyst and Young Man Lincoln.

“An intimate, deeply felt, keenly expressed examination of a daughter’s complex relationship with her mercurial, larger-than-life father. Along the way, this well-wrought personal evolution sets forth a historical and psychological portrayal of the evolution of America itself. American Icarus is an American saga, a reading journey written in unflagging detail, in prose that never lags.” –David M. Carroll, naturalist, author, Self Reflection with Turtles and other books. 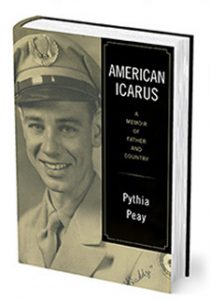 From the Book Jacket:

This is the story of Joe Carroll: fully paid-up member of the Greatest Generation, aviator, farmer, and handsome Irish charmer who radiated exuberance for life—a literal and metaphorical flying boy. With his head in the clouds, this American Icarus embodied all that was aspirational and attractive about mid-twentieth century America, with its technical ingenuity, bravado, and its belief that the only way was up. But Joe was also a destructive, impulsive alcoholic; like many of that generation he held experiences and feelings close to his chest. Only on his deathbed did Joe acknowledge the pull of gravity, reaching out to his estranged family, reflecting on his life, and contemplating the afterlife.

Depth journalist Pythia Peay is Joe’s eldest child. In this evocative, thoroughly researched, and sensitively drawn depiction of her father’s life and times, Peay maps the trajectories of this troubled, ordinary Joe, who as a youth had suffered a Dickensian twist of fate that would leave him a divided man. Guided by her father’s memories he recalled as he lay dying, Peay charts the ancestral rivers that led a working-class boy from depression-era Altoona, Pennsylvania, to the Air Transport Command and Brazil during World War II; post-war Buenos Aires, where Joe married an Argentine beauty with ancestral connections to the foundation of the United States; newly independent Israel, where he flew for El Al; the Missouri heartland in the 1950s, where he ran a farm and raised four children while traveling the world for TWA; the upheavals of the 1960s that would drive Peay and her father apart; Mexico, where her parents fled to escape their failing marriage; and finally, Texas, where Joe got cancer and died.

In narrating Joe’s life, Peay not only delineates the depths of the Depression, the highs of the “good war” and the psychological toll it exacted on the Greatest Generation, as well as the undercurrents that led to her family’s disintegration in the 1960s, but she unpacks the myths and archetypes that shape the United States—its perpetual restlessness and heroic individualism—in a journey that leads, intimately and movingly, to a final reconciliation with a dying patriarch and the ghosts of the past.

Pythia is an author, depth journalist, and speaker whose work has appeared in numerous magazines and newspapers, including Washingtonian, Religion News Service, The Washington Post, and The Huffington Post. read more.

Listen to my interview ​with
Mark Matousek